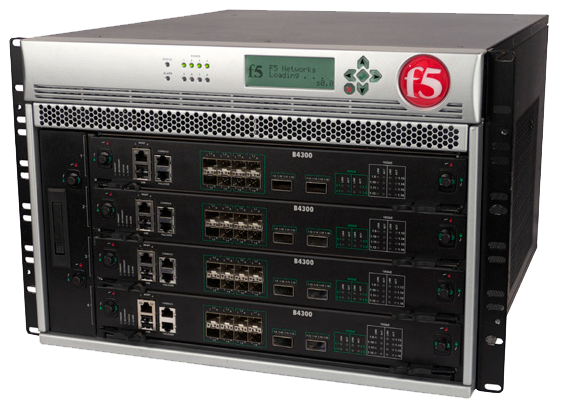 The NEBS-certified 4480 was designed with carrier-grade reliability in mind. With support for industry-first 40GbE and 100Gbe (QSFP28) ports, multi-tenant virtualization support, and the ability to add up to four B4450 blades to its chassis, application delivery network and security scales as business demands grow.

Each F5 VIPRION platform is a single, powerful Application Delivery Controller (ADC) with modular performance blades you can add or remove without disrupting users or applications. Instead of adding devices and segmenting applications, simply add more power to your existing infrastructure as needs and opportunities arise. VIPRION enables the scalability you need to establish a sustainable ADN growth strategy.

Reduce costs
Decrease OpEx and CapEx with the F5 ScaleN architecture, which provides unique flexibility to scale on demand, virtualize, and deliver application scaling in a device cluster.

Consolidate devices
Reduce the number of servers and ADCs along with power, space, cooling, and management requirements.

Achieve ultimate reliability
Make the ADN always available with redundancy at both the chassis and blade levels.

As your infrastructure grows and requires more power for layer 4 and layer 7 processing, SSL, compression, and more, you can simply add a blade to the VIPRION chassis and it will start processing traffic automatically. Whether you’re using one blade, four blades, or eight blades, VIPRION remains one device with fixed management costs.

Intelligent Performance Where It Matters

Traditional performance measurements in terms of throughput don’t accurately represent the complex needs of delivering modern web applications. Connection capacity and L7 transactions per second are critical. For instance, ADCs must be able to process high levels of layer 4 and layer 7 connections and make application-layer decisions such as removing sensitive information or transforming application-specific payloads. BIG-IP appliances have the intelligence and performance to handle application layer decisions while securing your data and infrastructure.

VIPRION can help you simplify your network by offloading servers and consolidating devices, saving management costs as well as power, space, and cooling in the data center.

With VIPRION’s massive performance and scalability, you can reduce the number of Application Delivery Controllers you need to deliver even the most demanding applications. By offloading computationally intense processes, VIPRION significantly reduces the number of application servers you need. VIPRION includes:

In a VIPRION system with multiple blades, you can remove a blade without disruption. The other blades will instantly take over the processing load. You can also deploy VIPRION in an active/standby configuration to add another level of redundancy. The chassis is built with redundant power supplies and field swappable components. This multi-layered redundancy significantly reduces the possibility of downtime.

The Advantages of VIPRION Technology:

With VIPRION, your organization benefits from the unique F5 ScaleN architecture and patented hardware and software innovations that offer unmatched capabilities.

Increase resource capacity and performance with on-demand scaling, where you can simply add more power to your existing infrastructure instead of adding more devices. VIPRION chassis provide true linear scalability through modular blades that use F5 Clustered Multiprocessing (CMP) technology. As blades are added, their CPU resources, network interfaces, SSL, and compression processing power all automatically become available as the configurations and policies are copied to the new blades from the master blade.

F5 is able to virtualize services with a multi-tenant architecture that supports a variety of BIG-IP versions and product modules on a single device. Multi-tenant device virtualization is provided by F5’s unique Virtual Clustered Multiprocessing (vCMP) technology, which enables VIPRION to run multiple BIG-IP guest instances. Each BIG-IP guest instance looks and acts like a physical BIG-IP device, with a dedicated allocation of CPU, memory, and other resources. vCMP offers per-guest rate limiting for bandwidth and SSL, enabling customers to achieve different performance levels for each guest.

Each vCMP guest can further be divided using multi-tenant features such as partitions and route domains, which can isolate configuration and networks on a per-virtual-domain basis. Within each virtual domain, organizations can further isolate and secure configuration and policies by using a role-based access system for greater administrative control.

The ability to virtualize BIG-IP ADC services means service providers and enterprise users can isolate based on BIG-IP version, enabling departmental or project-based tenancy as well as performance guarantees, while getting the benefits of managing a single, consolidated application delivery platform and increased utilization of VIPRION systems.

Application Service Clustering delivers load-aware, application-level failover and comprehensive connection mirroring for a highly available cluster of up to eight heterogeneous devices. Workloads can be moved across a cluster of devices or virtual instances without interrupting other services and can be scaled to meet demand.

The ScaleN architecture provides the ultimate flexibility to scale on demand, virtualize, and deliver application scaling through device clusters.

Note: Only the same type of supported blades are enabled for traffic processing in each chassis. Different blade models cannot be mixed within the same chassis. Only optics provided by F5 are supported.

Using custom disaggregation, high-speed bridge FPGAs, and advanced Clustered Multiprocessing (CMP) design, VIPRION shares the processing load not just within a blade, but across the entire chassis. The physical interfaces are fully meshed. Any port on any blade can be used for any application, so the system can be wired for redundancy and simplicity.

Spend less time managing your Application Delivery Network. To administrators, the VIPRION unit looks like a single ADC. One blade is automatically selected as the primary, and all settings and controls are mirrored to the other blades. When a new blade is plugged in, it will install the firmware version from the primary blade, copy all of its settings, and begin processing traffic within minutes.

At the heart of VIPRION is the F5 unique operating system called TMOS that provides a unified system for optimal application delivery, giving you total vision, flexibility, and control across all services. TMOS empowers VIPRION to intelligently adapt to the diverse and evolving requirements of applications and networks.

When a SYN flood is detected, the ePVA turns on the F5 SYN Check feature to prevent invalid sessions from getting to the servers or exhausting blade resources. SYN Check is unique in that it can be applied on a per-virtual-IP/application basis, meaning if one application is under attack, the others are not affected. F5 is the only ADC that implements hardware-based SYN cookies in L4 and full-proxy L7 mode.

Given constantly increasing demands for connectivity and growing concerns about tenacious and complex attacks, service providers and enterprises need solutions that keep up. VIPRION blade options deliver flexibility and efficient scaling capabilities. Notably, these options include the purpose-built 4450 blade, which is Network Equipment-Building Systems (NEBS) compliant and offers two 100 GbE ports and six 40 GbE ports for superior efficiency, throughput, and performance. In a fully loaded VIPRION 4800 eight-blade chassis, the 4450 blade supports around 1.2 billion concurrent connections to scale for today’s Internet of Things and into the future.

The 4450 blade is the first ADC to provide 100 GbE ports in the QSFP28 form factor, the leading form factor for data centers adopting 100 GbE, providing the smallest footprint and lowest power consumption of any 100 GbE form factors. The 4450 blade delivers significant performance improvements for 2K keys with SSL as well as for ECC, enhancing PFS capabilities.

The VIPRION 4450 blade, in conjunction with the VIPRION 4480 or 4800 chassis, enhances performance, enables dynamic resource allocation, and maximizes service consolidation. The superior performance and capacity scale in linear fashion with each additional blade, and traffic begins being processed automatically after a blade addition. When deployed with BIG-IP Advanced Firewall Manager (AFM), F5’s high-performance, stateful, full-proxy firewall, the 4450 blade quickly ramps to mitigate even the worst DDoS attacks, distinguishing between malicious and legitimate connections and discarding malicious connections before they can devastate network resources. When combined with BIG-IP Application Security Manager (ASM), F5’s agile, scalable web application firewall, the solution can mitigate and defend against nearly any L7 attack, too.

Service providers are overwhelmed by an ever-increasing number of mobile devices that require connectivity to the providers’ networks and applications. This number will be dwarfed, though, by the demand for connectivity from the Internet of Things (IoT). In addition, the extent, tenacity, and complexity of attacks against networks, applications, and subscribers continue to worry service providers, who are also besieged by the exponential growth of signaling traffic, the impending loss of IPv4 addresses, and the growing movement to IPv6.

As service providers explore how to best manage the migration from 4G to 5G networks, network scalability and extensibility are crucial. The VIPRION 4450 blade and 4800 chassis combine for a superior connection setup rate of 20 M connections per second (CPS), easing migration.

Furthermore, as organizations run out of IPv4 addresses, supplementing existing IPv4 addresses with IPv6 addresses, the VIPRION 4450 provides support for up to hundreds of millions of concurrent sessions, thus handling the crossover with ease.

One of the most effective network attacks continues to be distributed denial-of-service (DDoS). The VIPRION 4450, in concert with F5 BIG-IP Advanced Firewall Manager (AFM)—a highperformance, stateful, full-proxy firewall—quickly ramps to distinguish between malicious and legitimate connections. This combined solution then absorbs or discards malicious connections before they can devastate network resources. Escalating subscriber and data usage helps drive the need for firewalls in a service provider’s SGi LAN. The VIPRION 4450 blade’s support for over a billion concurrent connections ensures that service provider networks, data, and subscribers remain secure.

The VIPRION 4450 blade, in conjunction with the VIPRION 4480 or 4800 chassis, further enhances performance, enabling dynamic resource allocation and maximizing service consolidation. Performance and capacity scale in linear fashion with each additional blade, so service providers adding a blade can begin processing traffic automatically, without a major upgrade. 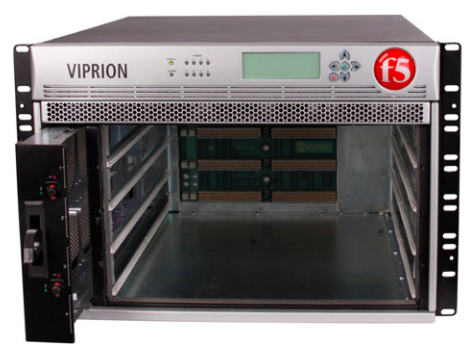 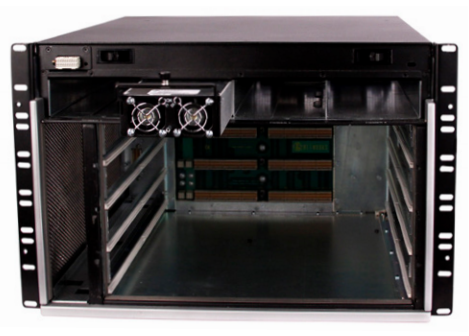